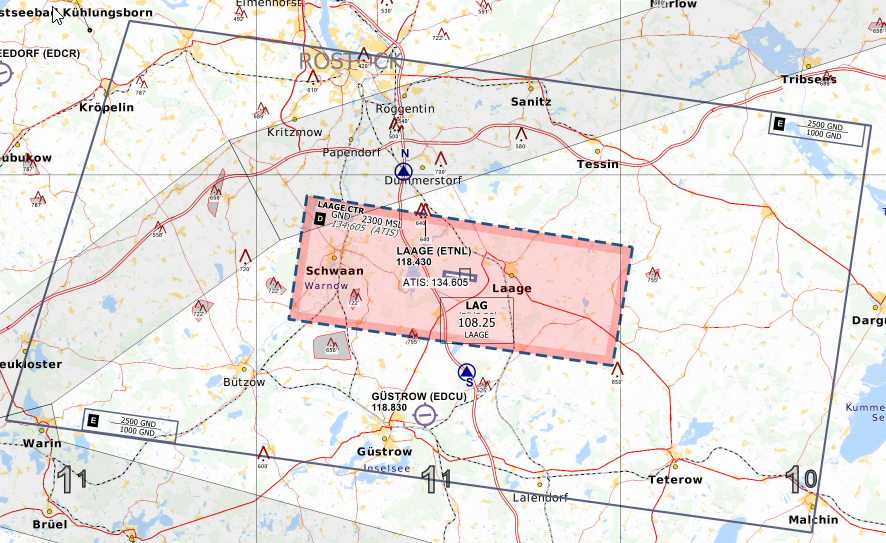 We will start with Rostock Laage. As you can see, the airport has a D-CTR just like all other airports in Germany. Additionally, the airport has a lowered airspace E around the CTR. Almost all military airports have that. The horizontal boundary of the area of responsibility of the Radar coincides with the lowered E airspace. The horizontal boundary is 5500ft. Below 5500 ft and inside that lowered E, the radar controller is responsible for the IFR traffic. As always in airspace E, VFR may enter the airspace without contacting ATC.

In general the military Radar has the same responsibility as a typical APP controller. However, you have to remember that you are working with high performance military aircraft and possibly VFR aircraft that call for FIS. In this case you should not rely on visual separation alone as the closing speeds of a 300kt military jet and a 80kt VFR aircraft is too great to simply ignore. In this case working with vertical separation is the easiest solution.

In general military Radars seldom work with procedures. They mostly use headings and altitudes. Speeds are also avoided. VFR and IFR departures are possible. If the pilot departs IFR, he will be handed over to the responsible DFS controller fairly early due to the low airspace boundary. If the pilot departs VFR, he has to follow the VFR departure route which can be found in the Military AIP (VAD). Every deviation from the departure route has to be requested by the pilot and approved by ATC ("request to leave CTR on top").

If the aircraft is arriving IFR, it will be handed over from Center descending FL70 and as early as possible. The aircraft should be released for descent by Center before handoff to allow the Radar controller to control the aircraft. The pilot may decide if he prefers to land VFR or IFR. VFR the arrival is done on TWR frequency as published in the VAD charts (overhead approach maneuver as described below). Sequencing is then done using traffic infos and by telling the pilot which number he is in the sequence.

If VFR arrivals aren't possible then the military jet will be vectored to procedure and it will fly a PAR, ILS, TACAN, NDB or RNAV approach but without the procedures as described below.

Lastly, we will discuss IFR pickups. IFR pickups are mainly used for military aircraft that enter the area of responsibility of the Radar controller with the intention to land IFR. Departing traffic to leave will already receive the clearance on ground. IFR pickups for military aircraft are much simpler than what you usually do for civil aviation. You just have to make sure that the jet is above the MVA, that it has been assigned a HDG and an altitude (or you have assign either or both during the IFR pickup) and then you say "IFR starts now" and that's it. You should also include the clearance limit (e.g. "cleared to Schleswig") but that is often left out in real life. If you give a IFR pickup for an aircraft that is leaving your sector, you need to coordinate an actual IFR clearance with the DFS station. However, if necessary you can start IFR immediately (mind the MVA) and coordinate the clearance with the DFS station later.

In general military airfields tend to have a mix of ILS, NDM (DME), TACAN (DME) and RNAV approaches. However, most do not have an ILS. Instead the Precision Approach Radar (PAR) is used as a precision approach. However, that is not an instrument approach and thus will be explained in a later chapter.

As mentioned before, instrument approaches are mainly used without the procedure. Most military procedures include a DME Arc and then the familiar final approach. The waypoints on the procedure usually don't have a name so if you want to clear someone to fly the approach via the procedure, it's best to use the terms "Initial Approach Fix" (e.g. "out of IAF cleared TACAN rwy 27") or in general just explain to the pilot what you want him to do (e.g. "Join 12 DME Arc of TACAN rwy 27, cleared TACAN approach runway 27"). That is not quite the way they do it in real life but it will probably work well enough on Vatsim.

In general though it is enough to vector the aircraft to the final approach track and clear them for the approach. Remember that these are non precision approaches so the intercept must be done before the FAF and on the published altitude. You should also make sure that the aircraft has 2NM of straight and level flight before initiating the descent.

In this approach the pilot is provided with instructions and information on the aircraft's location relative to the extended centerline and distance from touchdown. During this approach there should be only one aircraft on frequency. If you ever need to give an SRA during operations with multiple approach controllers, you can let the director handle the SRA while the arrival controller handles all other traffic as usual.

In general the procedure for the controller is:

The PAR is very similar to the SRA but with better radar equipment to provide precise guidance. That's why it is considered a precision approach. If you have the ground radar plugin and its approach path function available for your airport, you can provide more accurate guidance to undertake such an approach.

The main different to the SRA is that the controller does not stop talking so there is no time for the pilot to confirm any instruction. ATC continues talking until the threshhold of the runway.

If you want to get an idea watch this video.

You will notice in this video that in addition to heading instructions, ATC also gives information about the position of the aircraft in relation to centerline ("right of centerline", "correcting" etc.) and glide path ("below glide path" etc.) while in the SRA ATC only gives headings and recommends an altitude.

The Overhead Approach Maneuver is a visual procedure that is used at military airports for the use of military jets flying VFR. These jets usually carry a lot more kinetic energy than civil aircraft do and need to dissipate that energy before landing. For this purpose the procedure is published on military airports. This is equivalent to a carrier approach. You can find the charts in the German Military AIP designated as VAD. Some examples for airports with this procedure are ETHC, ETNG, ETSB, ETSH, ETNL, ETNT but there are more. In these charts you will always find an Entry Point and a predetermined route that leads to the "Initial". The "Initial" is a point about 2 NM from the runway.

The procedure after the Initial is depicted on the right. The Military jet will approach with 300 kts indicated airspeed and descend to the published altitude of the procedure. Usually, the published altitude is about 1000ft-2000ft higher than the airport elevation. The aircraft will then overfly the runway until reaching the break point. The standard break point is in the middle of the runway upon which the aircraft will enter a 3G turn to either side and decelerate in that turn. It is possible to fly this procedure faster but then the pilots needs to pull harder and thus increase the centrifugal force in the turn. In simple words: The harder the pilot pulls the better the deceleration.

The jet will then continue in the traffic circuit while still decelerating. On downwind the pilot also puts down flaps and gear. The pilot should reach the approach speed before initiating the final turn. After about half of the final turn the jet will start descending towards the runway on which it will land. As you can see in the picture, the break can be flown early and late which gives ATC the opportunity to sequence aircraft in case ATC deems it necessary, however, because this is a visual maneuver, the sequencing should be done with traffic information and numbering.

In general, it is very easy to dissipate energy in this maneuver which is why it is preferable for military jets. Furthermore, this procedure minimizes the time that aircraft spend low and slow, thus, minimizing the time that these jets are most vulnerable.

If you let a formation fly this overhead approach then they will break individually during the procedure and also land individually one after another. When the first aircraft is on downwind you can ask the pilot about his intentions. If he wants to do a final landing then you can ask all other pilots of the formation if they also want to do a final landing. If they confirm that they want to perform the final landing, you can clear the whole formation for landing at once (e.g. "wind 25005kts, runway 27 cleared to land as formation").

There isn't much to talk about for transporter approaches. In general Military transporters try to spend as little time as possible close to the ground. Therefore, the standard combat approach for a transporter is an approach that is as steep as possible. In general, transporters prefer to maintain altitude as long as possible. They will configure for landing like landing gear down, flaps and even speed brakes and then descend for the runway with up to 4000 ft per minute.

Additionally there are Transporter Tactical Approaches called TAC 1, TAC 2, and TAC 3 which can be seen in the picture of the right.They are designed to make the approach direction of a transporter less predictable by changing between TAC 1, 2 and 3. TAC 1 is basically the straight-in approach. TAC 2 is just like a circling approach and TAC 3 an approach orthogonally to the runway. TAC 3 has two directions it can approach from so additionally North, South, East and West should be added to specifcy which direction is used.