Frankfurt Apron can be split into 4 stations as shown in the table and images below.

If more than one of these stations is staffed, Delivery needs to be staffed first. If just one Apron is online, this Apron takes over all other Apron stations, but not Frankfurt Ground.

Taxiway L is always used in the direction towards the holding point of the center runway, depending on runway in use. Taxiway N is used the other way (see image). During 07 operations taxiway N west of N11 is also used towards the west, which shall be used for runway 18 outbounds (L, N14, N).

Usage of Taxiways N and L

Taxiway Restrictions: For B747, A380, A346 and B77W can be found here. The auto gate assignment will take care of that, so if a stand is auto assigned, the aircraft is allowed to taxi on the taxiway to get there.

Taxiway Links: Links connect taxiways N7 and N8 at different locations to enable the best traffic flow. If N7 and N8 are used within the same instruction, Links 3, 4 or 5 shall be used whenever applicable. These Links should be used with care because some pilots might not find/know them (Links are difficult to find as there are no signs, just visible at the charts). More images are available here.

Link 1 does not exist in real life anymore, and can not be found on any charts! Link 3 or N8 - N - N7 should be used instead. 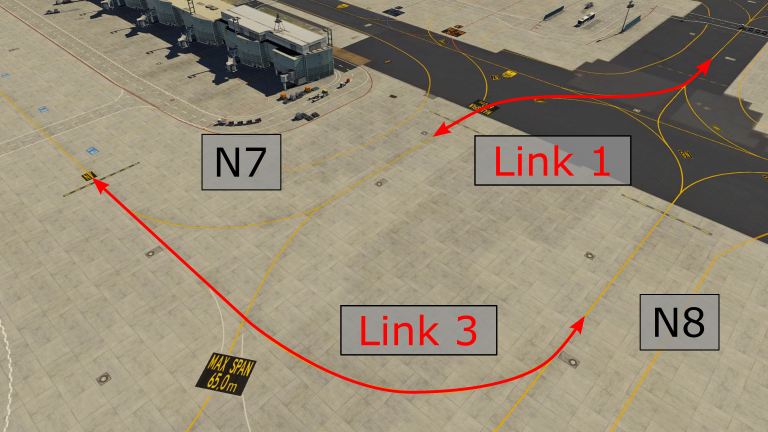 Colored Lines: Colored lines (orange and blue) are available at N in front of Terminal 2 and at N7 between N and L. These lines can be used by all aircraft up to a size of an A321/B739. With P3D colored lines between N1 and N3 are not available. Some preplanning is required to use them in the most efficient way. 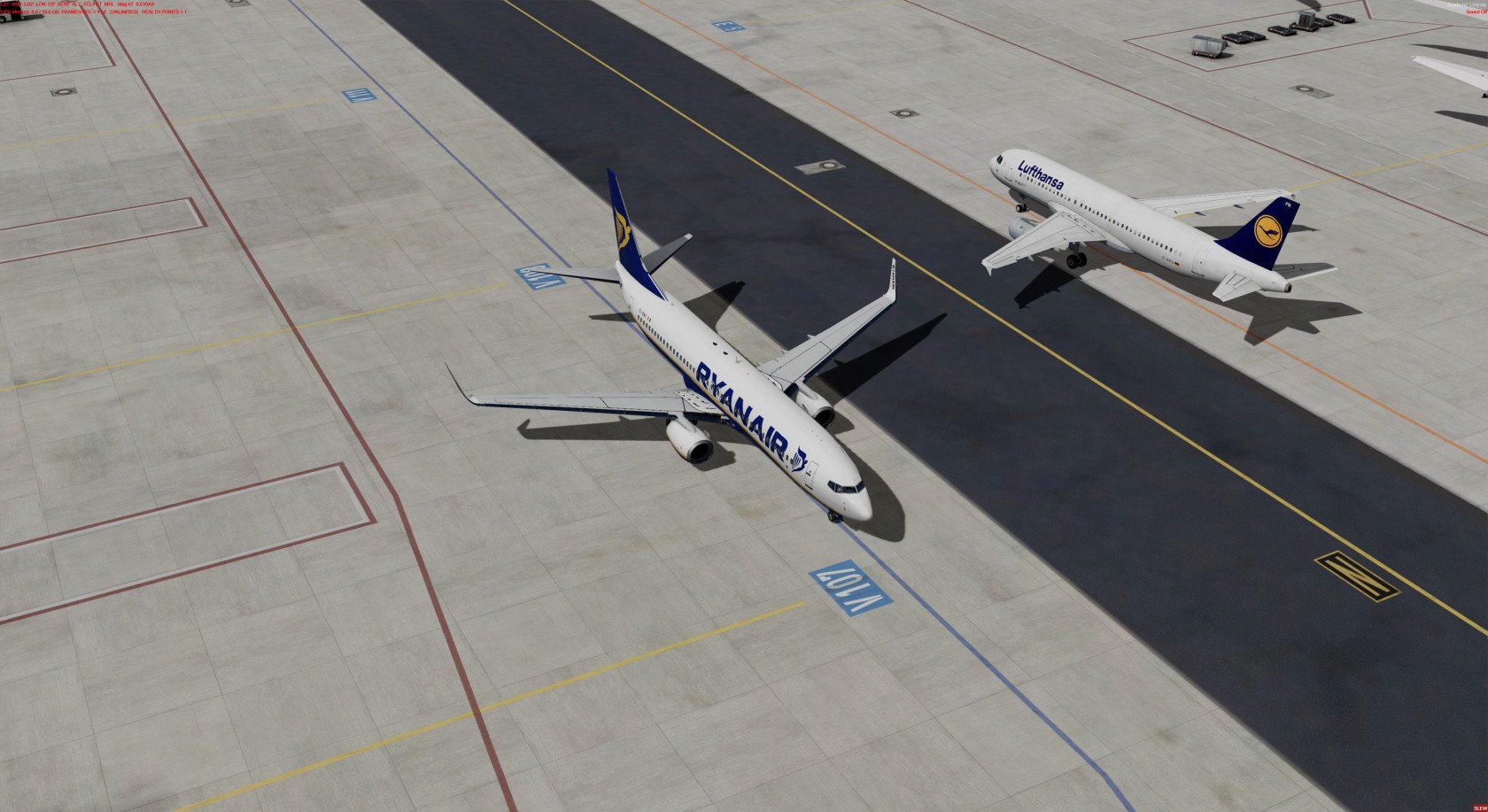 Pushback: V134 - V178 (all facing south), as well as positions C2, B10 and A1 are taxi out positions. V143 and V144 are pushback positions! Pushback from positions V106 - V118 (even number) should be issued straight back to allow multiple pushbacks and taxi in without blocking other positions.

Gate Assignment: Gates will be assigned by Ground Radar Plugin according to the real world. A-Stands are mainly used for DLH, AUA, TAP, AEE, SWR and UAL (Schengen and Non-Schengen area). Gates A50 to Gates A69 are DLH only. B and C-Stands are used for Star Alliance flights outside the Schengen area. Terminal 2 is mostly used for non-Star Alliance members and low cost operators, that are also located at the V-Positions in front of Terminal 2.

The first apron controller the inbound traffic contacts will always tell them their gate, even if it's under another Apron's responsibility.

Inbounds 25C / 07C: Inbound traffic to runway 25C/07C will be handed over from Tower with a hold short of L. This traffic is still blocking the runway after vacating and has to be treated with number one priority.

Handoff: Handoff to the next Apron controller will always take place with a hold short instruction of the next intersection close to the border of the area of responsibility (e.g. traffic from Center to West at N with a hold short of N10). Do not label any hold short for the transfer that is defined by the SOP!

Traffic Flow: If you have any “potential conflict” that will just generate waiting time for the pilot, please try to solve the problem without assigning a new gate. That will improve your preplanning skills a lot. Always try to work with conditional information as precisely as possible, but do not overload the pilot with useless information!

DLH456 at N4 number two behind Singapore A350 from right.

DLH789 behind opposite British Airway A319 taxi to holding point runway 18 via N, hold short of N5.

Runway 07C/25C: Apron will not clear outbound traffic into intersections for runway 25C/07C. All outbounds are instructed to hold short of the intersection and Tower will instruct them to join the intersection that might be the best for the departure sequence.

It is important that every handoff takes place as early as possible and has to be free of conflicts. Every potential conflict needs to be solved prior to the handoff. As soon as the outbound traffic is in contact with Tower, it is released by Apron up to L1 and Tower has the possibility to use every further intersection available. Even if the pilot reported to Apron to be able for L6, Tower still can use L3 (or L1) intersection if there is no benefit for the outbound to use an intersection. In that situation with traffic on L under control of Tower, other outbound traffic e.g. joining L via N3 needs to be number 2 behind the traffic on L.

Intersections a pilot is able for should be noted in the remarks. Do not label any hold short for the transfer that is defined by the SOP!

Keep in mind that if you would like to solve a conflict it might be useful to let outbound traffic continue via L even if he would be able for L6.

Runway 18: Departures out of runway 18 will always be sent directly to the holding point via N/L. Handoff should take place early, so that Tower still has the chance to take outbounds via N-South. During 25 operations intersection L needs to be coordinated. During 07 Operations N is still preferred for all heavy aircraft (routing via L, N14, N).

During high traffic load (decision rests with apron control) All MEDIUM and LIGHT aircraft departing via runway 18 and parking east of taxiway N3 shall be asked if they are able for departure out of intersection S. If they are, they should taxi to hold short of U2. Frankfurt Tower is responsible for further taxi.

The taxiways used for crossing are based on the planned parking position and runway in use (see image below). These taxiways are mandatory and only if a pilot uses the wrong taxiway the Tower controller should deviate from that after coordination with Apron. It is also possible to coordinate a slightly different taxiway/procedure between Tower and Apron for crossing.

LVO: During LVO inbound traffic landed on runway 25L/07R will not cross the center runway. All traffic needs to taxi via T or Y, depending on their planned stand.

Tower is not allowed to issue take-off clearances as long as the intersection is blocked by just crossed traffic. That’s why Tower will issue the initial taxi route after crossing to the Pilot. This depends on the runway in use and the intersection used (see images).

When traffic crossed the runway it shall be sent to the according apron control as soon as possible, so traffic does not need to stop.

Apron is responsible for separation in the Apron at all times. Tower can issue the crossing clearances without looking at potential conflicts. A lot of planning is required for that.

Inbound traffic entering the Apron without crossing the runway will be instructed according to the table below. Frankfurt Apron is always responsible for all GAT and movements at the southern apron!

Border at N5: Traffic from Center to East Apron needs to hold short of N5. As soon as the handoff is initiated, this traffic is released and will always be number one (green aircraft). Only hand off aircraft which you do not need to stay there (e.g. if you would like to have your outbound at N5 as number 1 - see image, THY25L).

Mixed Area: Taxiway L between N5 and N11 is used in mixed responsibility and owned by West and Center Apron. Inbound Traffic with parking position inside the area of Center Apron will get the handoff from East to Center Apron short of N5.